The James Bond franchise has enthralled audiences for over half a century now. It has had to adjust to changing times, both in its industry and because of world events, but has never lost what makes it unique. That is charismatic leading men, eccentric baddies, outrageous plots, cool gadgets, exotic locales, keen fashion sense and of course beautiful women.

In recent times, Daniel Craig has livened up the series with two of the best films in the franchise. The latest one SPECTRE (2015) released in November 2015 is a worthy addition to the Bond canon but it falls just outside the top 10.

A very tough decision. Casino Royale reinvigorated the franchise with combination of the old formulae and a refreshing approach to storytelling. The character development is something we did not see much of before. But, this is still Bond. A better version of Bond. And one of the better origin stories of any franchise in recent memory. That includes Spiderman, Jason Bourne and Christopher Nolan’s Batman franchise. Casino Royale is not just a good Bond movie but a good movie by any definition. From Daniel Craig, to Eva Green, to Mads Mikkelson, this is simply the best.

The third film of the franchise. It is also probably the one that turned the franchise from a successful one to a cultural phenomenon. All the elements are here. Shirley Bassey’s theme was the first to appear in a Bond film and may be the best. It probably has the two single most famous scenes of the franchise containing Jill Masterson’s (Shirley Easton) gold-covered body and the giant laser when Bond manages to talk his way out of trouble. Not to mention a certain Pussy Galore’s (Honor Blackman)and her Flying Circus. It was so successful that it became the prototype for the franchise going forward.

The second film from the franchise resembles more of a John Le Carre Cold War espionage thriller. In this one, Bond (Connery) is sent on a mission to Istanbul to seize a Soviet decoding device from a defector. But, there is so much more going on in this one. This is the film where SPECTRE enters the franchise. Robert Shaw plays a menacing gun-for-hire named Grant. Surely, one of the best henchmen of the franchise next to Oddjob and Jaws. And to say nothing of the iconic Rosa Klebb (Lotte Lenya).

Daniel Craig’s third effort erased the memories of the mediocre Quantum of Solace which threatened to undo the gains of Casino Royale. Bond’s loyalty to M is tested after MI6 is attacked by a former agent named Silva played by the amazingly versatile Javier Bardem. Like Casino Royale, it updates Bond to new 21st century threats like cyber terrorism. Adele’s theme and the reintroduction of gadget expert Q, played by terrific young actor Ben Whishaw, are just some of the many highlights.

Pierce Brosnan’s first and best film. Golden Eye reinvigorated the series after the hiatus that followed Timothy Dalton’s departure. Bond teams up with Natalya Simonova (Izabella Scorupco) to prevent the hijacking of a nuclear space weapon by a former secret agent with a vendetta against him named Alec Trevelyan, played by Sean Bean (before Lord of the Rings and Game of Thrones fame). This one is an action-packed thrill ride. Unfortunately, Brosnan peaked in his debut in the role.

George Lazenby’s only outing as Bond and I believe it to be the most underrated in the franchise possibly because Lazenby never gained the same notoriety as the others. This time, Bond goes undercover to unravel the secret of Blofeld’s (Telly Savalas) allergy research lab in the Swiss Alps. The badguy’s scheme is undoubtedly one of the more far-fetched of the franchise and it is occasionally off-putting. Still, there is a lot here to admire. Diana Rigg is one of the early strong-headed bondgirls and we see a human side of James Bond not seen again in such depth until Casino Royale. 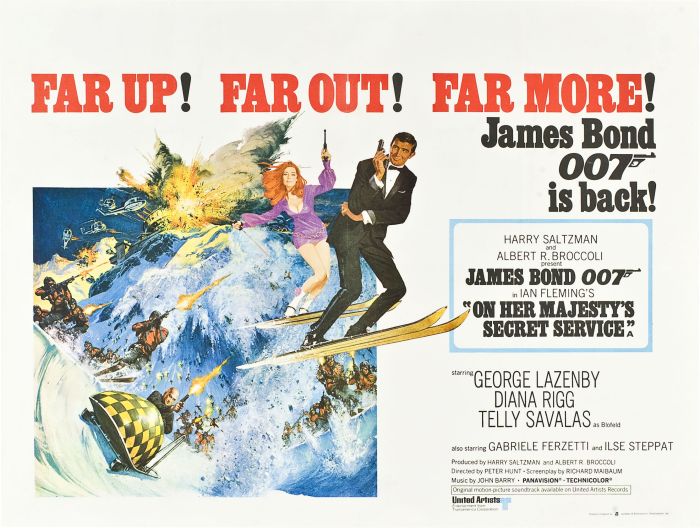 The one that started the phenomenon. Bond (Sean Connery) is sent to Jamaica to investigate after a colleague goes missing. More than 50 years gone, this film might seem a bit underwhelming. It is missing many of the hallmarks that today’s audiences have come to associate with the franchise. However, the famous scene of Ursula Andress’ Honey Ryder on the beach, is a particular highlight. She would become the model for every bondgirl for the next several decades. To a fault. Not to mention, the first time we hear “Bond, James Bond.” Priceless.

In this one, James Bond is sent to one of his favourite destinations in Bahamas to recover two nuclear warheads stolen by the SPECTRE organization. Adolfo Celi proves to be one of the best early Bond villains as Largo. The shark pool scene is very worth seeing. There is this one chase seen through Nassau just after the halfway mark that runs far too long. However, the underwater climax is an impressive achievement even for today’s high standards. Never Say Never Again (1983), done separately from the studio, is loosely-based on this one.

Bond (Roger Moore) is called in to investigate the hijacking of British and Russian nuclear submarines. With the exception of Goldfinger, this one probably has more memorable moments than any film in the franchise. It includes the sports car/submarine scene, a notorious trapdoor and an over-the-top villain with a ridiculous plan to start World War Three and rebuild civilization under the sea. Yes, it is full of excess but it is just so much fun. Most of the jokes from the Austin Powers franchise come from this one. Barbara Bach is also great as super-sexy Russian spy Anya Amasova.

When a British spy ship mysteriously goes down, Bond (Moore) must race to recover a missile command device among the wreckage, before the Russians do. He meets two Greek businessmen (played Topol and Julian Glover), both with links to the Russians and each appear to have an ulterior motive. The fun is trying to determine which one is on his side. Carole Bouquet plays Melina Havelock, whose parent’s murder, she believes is related to the conspiracy. Easily, one of the best plots of any Bond film. And the conclusion at Meteora is also very memorable. A gem. 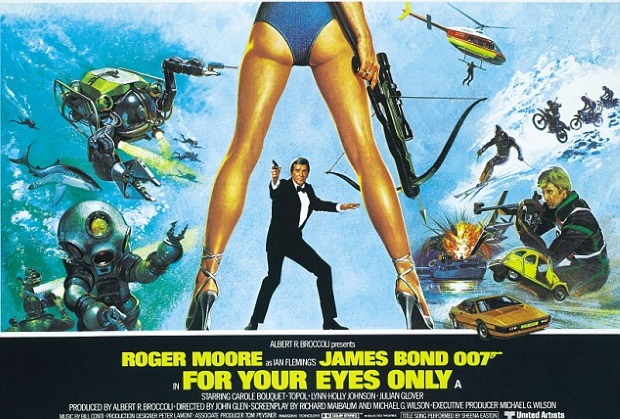